Tech Adventures with The FBI – Part 1

Posted Jun 15 2020 by admin in Analysts and Analysis, History, Personal Tech with 0 Comments

My friend, though I don’t think we’ve ever met IRL, Christian Mohn (@h0bbel) mentioned Tempest, an NSA specification for electronic security, in a twitter conversation today. That mention brought to mind a couple of good stories about the times friendly FBI agents showed up at my office for a chat.

Mr. Marks We Would Prefer If You Didn’t Give That Speech

As I’m sure I’ll recant in another blog post someday; my father ran a prophouse. Theatre, movie, and TV productions would rent everything from bedsteads to broomsticks and he had a 5000 square foot loft full of almost anything you could imagine. Back in 1981 I started my first company in an office he had always wanted me to make my own in the front of the warehouse.

Being a kid of the 60s., and working long hours, I took a TV from the warehouse and set it up in my office. That particular Magnavox Star System TV was the first generation where the remote had a numeric keypad, a big step up from channel up and channel down buttons especially if you ever wanted to watch one of the UHF stations. While the remote, and TV keypads were digital the actual tuner was more analog and the remote hand fine-tuning up and down buttons that covered the whole range of frequencies the set would receive (and as we’ll soon see maybe some it shouldn’t). 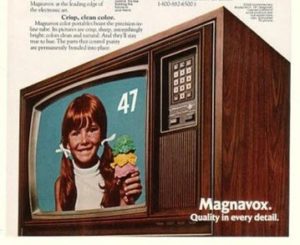 Note for my international readers. Magnavox at the time was the consumer electronics brand name for Phillips in the US.

On my desk I had an ADDS Regent 60 terminal, Dad had promoted both the TV and terminal from their respective manufacturers, sent them to some production, and them put them into inventory for rental. 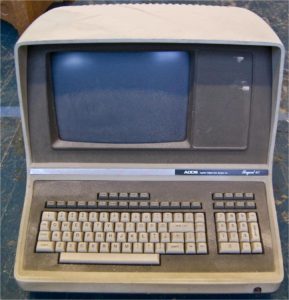 The Regent 60 was high-end for a terminal, it even had a print screen function, and as was standard for the late seventies/early eighties, displayed 25 lines of 80 characters black and white.

When I turned the TV on, I discovered that when people acted with the remote control, they managed to tune the TV to well outside the frequency range of most New York TV stations. I held the fine-tune down button for a minute releasing it pretty quickly when I saw the WordStar screen of my terminal on the TV.

I had known that a CRT refreshed its screen 30 times a second, and that refresh created an RF signal, but I didn’t think it was as easy as tuning a TV to channel 102.7. I thought this was pretty cool, and creepy in a spy on your spouse’s late night Zork sessions kinda way.

So, I brought a few friends over to the office to see the demonstration. One of those friends suggested I give the demo somewhere public. I can’t remember who specifically the friend was or which event I was going to speak at. Several of the guys I hung out with at The New York Amateur Computer Club were also friends with the editors of 2600 and I had been speaking at local events like The Interface Group’s Computer Showcase Expos.

Whichever event it was, it was public enough that someone in the intelligence community saw the notice of a demonstration of remotely viewing the contents of a computer terminal and decided they really didn’t want me to show the world just how vulnerable the contents of their screens really were.

I know this because about a week before I was scheduled to give my little demo a pair of friendly FBI agents came straight out of central casting down to the military haircuts and narrow ties to knock on the door of my office. While shock, fear and panic have blurred my memories of the conversation down to:

Me
Yeah that’s me?

FBI
Mr. Marks we see here that you’re planning on demonstrating how to spy on people’s computers. We’d really prefer that you didn’t.

Me
You mean this, reach for the TV remote

Me
Is there something illegal here?

FBI
As we said we’d really prefer you didn’t demonstrate this. Another pair of agents are having <ring> you should answer that

The event organizer
Howard, we’re going to have to cancel that talk you were going to give.  Something about the FBI shutting us down.

Howard
Yeah, I get it.  Thanks.

and the nice FBI agents left their business cards and I never saw those particular FBI agents again.

Over the years I’ve heard of and/or spoken to about five people who had similar experiences, and canceled events. The details became public in 1985 when Wim Van Eck also viewed the contents of a CRT remotely with a TV Set and since he is Dutch published a paper without being talked out of it by the FBI. The process is now known as Van Eck Phreaking and I missed yet another opportunity to be famous.

Stay tuned for part II when those nice FBI agents visit me again.